Since 2018, the Solidarity Lab is a member of the largest social research network in the world, CIRIEC.

CIRIEC, initially named the „International Center for Research and Information on Collective Economics” was created in 1947 by Professor Edgard MILHAUD, a French economist at the University of Geneva.

Its objectives are to ensure and promote the collection of information, scientific research and the publication of papers on economic sectors and activities oriented to services of general and collective interest:

In these different areas, CIRIEC develops activities that are of interest to both decision-makers and scientific researchers. CIRIEC regularly reports on the state of social economy in Europe for the European Economic and Social Committee.  Members of the Solidarity Lab regularly contributed to these reports with information regarding Romania.

See below the CIRIEC Recognition Letter: 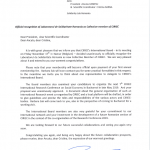