What to visit? Check the map below!

Bucharest is where traders met and travelers have mingled since the 15th century. It survived former dictator Nicolae Ceausescu’s razing of one fifth of the city to build his vision of a new Socialist capital. After a period reduced to a slum, the Old Town’s buildings are being slowly restored. The traffic-free cobbled lanes have been transformed into one of the liveliest nightlife zones in Europe. Bookshops, theaters, restaurants and cafes add more charm.

Do not miss in the Old Town:

At the centre of the historic area are the remains of the Old Princely Court (Curtea Veche), built in the 15th century by Vlad Tepes, also known as Vlad Dracula. According to local lore, Vlad kept his prisoners in dungeons which commenced beneath the Princely Court and extended under the city. All that remains today are a few walls, arches, tombstones and a Corinthian column.

Built in the 18th century by Greek monk Ioanikie Stratonikeas, the Stavropoleos Church is tiny, peaceful and beautiful. Built in Brancoveanu style it features an intricately carved and columned entrance. Fine stone and wood carvings and a combination of Romanian and Byzantine elements can be admired in the Greek Orthodox church’s interior.

The most beautiful bookshop in Europe

Set inside a beautifully restored 19th-century building, Carturesti Carusel is considered one of the world’s most stunning bookshops. Its impressively minimal design plays with light that filters through a central skylight to make the space seem like visitors are in a moving carousel.

The Palace of the Savings Bank

Boasting one of the most impressive neoclassical facades in the city, this structure was built in the 19th century to the design of French architect Paul Gottereanu (who between 1875 and 1900 designed more than 50 buildings in the city, to house the first Romanian Savings Bank). The square-shaped palace has a large central dome with metallic ribs separated by glass, which allows natural light to come in; there are also four smaller domes. The arch at the entrance, with its Corinthian columns, is a highlight of any architectural tour of the city.

Romania’s village houses take center stage at the unique, open-air Dimitrie Gusti National Village Museum , which stretches through leafy Herastrau Park. Guests can visit about 300 traditional buildings including peasant homes with steep roofs, thatched barns, heavy log cabins, churches and mills — all of which have been transported from towns across Romania. 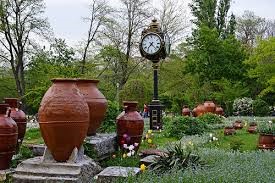 Bucharest is swathed in beautiful parks. The oldest, designed in the mid-19th century, is Cismigiu Gardens. Or there is the 400-acre Herastrau Park which features an open-air theater, as well as public recreation areas.

Built at the special request of Nicolae Ceausescu, leader of Romania’s Communist Party, the colossal Parliament Palace- formerly known as “People’s House” – is the world’s second largest administrative building after the U. S. Pentagon.It took 20,000 workers and 700 architects to build this masive structure that boasts 12 stories, 1,100 rooms,a 350-ft.-long lobby and eight underground levels, including an enormous nuclear bunker.

The Palace of Parliament is the world’s second-largest office building (floor area) and the third largest in volume (after Cape Canaveral Space Centre in the U.S. and the Great Pyramid in Egypt)The crystal chandelier in the Human Rights Hall weighs 2.5 tons. Some of the chandeliers have as many as 7,000 light bulbs. When construction started on June 25, 1984, the building was intended it to be the headquarters of the country’s Communist government. Today, it houses Romania’s Parliament, Bucharest International Conference Centre and Romnaia’s Museum of Modern Art. 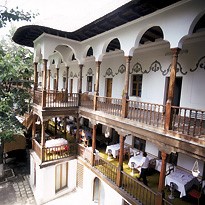 Built in 1804 by the wealthy Armenian trader Emanuel Marzaian (called by the Turks “Manuc Bey”), the inn has the preliminary talks concerning the Peace Treaty that put an end to the Russian -Turkish War (1806-1812). A favorite meeting place for tradesmen, Manuc’s Inn has preserved to this day its character and flavor. A restaurant, wine cellar and a pastry shop are now welcoming guests from all over the world. 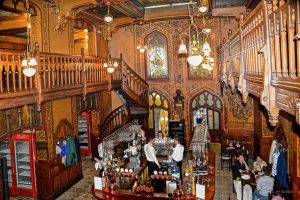 The Beer Wagon restaurant and beer house became, soon after the opening in 1879, one of the most popular meeting places for Bucharest’s literati who would gather to discuss matters of their time. Its neo-gothic architectural style is reflected both in the façades and the interior decorations: columns, arches, chandeliers, a wooden staircase, furniture and murals on the walls and ceiling. 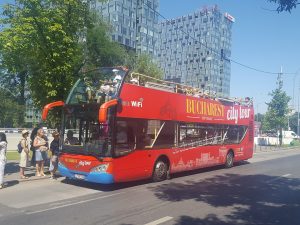 You can find the exact location and make your way to all these beautiful places by using the Conference Locations Map embedded below. Also, the map can be saved to Your Maps in Google Maps, by using this link.